Once again, Manchester City Council, is continuing with its failed policies, of socially cleansing areas of long term tenants, to build energy inefficient homes for the young, upperwardly mobile professionals. They have learnt nothing from their failures of the past, blaming their failures on everything but themselves. Without accepting there is a problem, taking ownwership of that problem, the problem will never be resolved. Manchester, is locked in an ever decreasing spiral towards total breakdown, like Detroit in the USA, where residents are having their water cut-off: http://en.wikipedia.org/wiki/Detroit

Even stranger, that football club is owned by an investment company the 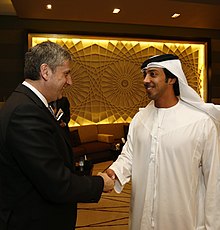 On the right, Sheikh Mansoor, with whose company Manchester City Council has signed the deal (via wikipedia)

Abu Dhabi United Group, the personal fiefdom of one Mansoor bin Zayed bin Sultan bin Zayed bin Khalifa Al Nahyan, Deputy Prime Minster of the United Arab Emirates, the federation of small absolute monarchies on the Arabian Peninsular, with innovative social policies such as the use of torture, capital punishment, high levels of labour exploitation, and 14-year prison terms for homosexuality. It is also the country with the world’s highest per capita ecological footprint, although reported to be…